We decided to go to Treacle for breakfast to get us set up for another day of festival-ing. We had been here before and thought the breakfasts were decent and have also had some good cocktails here (not at the same time as the breakfasts though!). The funky décor means that this place is often popular with the trendy set of an evening. Upon arrival, we were disappointed to find that the revamped menu did not include a full Scottish veggie breakfast, which they used to offer. This, therefore, slightly disappointed my veggie friend. However, we decided to persevere. There was an alternative of sweet potato and quinoa hash browns, poached eggs and avocado, which my friend opted for. No toast or drink came with this though. I went for a full Scottish breakfast. Whilst I ordered a diet Coke on arrival, I was not offered a tea or coffee with my full Scottish breakfast. Whilst I didn’t want one, the coke price was added into the bill and the coffee my friend had ordered wasn’t discounted either which could have been done as part of my meal. We thought this was a bit cheeky but not enough for us to complain. 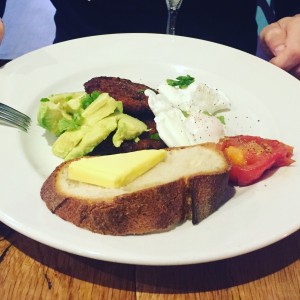 We waited a little while to order food but other than that, the service was relatively quick. Once the breakfasts arrived, they looked good. I handed over the toast and one of the two halves of tomato to my friend so his breakfast seemed more substantial. My plate consisted of a slice of toast with butter (now on my friend’s plate), two tomato halves, bacon, a sausage, hash brown, potato scone, mushroom, beans, egg, haggis and black pudding. Most of my breakfast was nice. The mushroom in particular was excellent and had a surprisingly large amount of flavour. However, the sausage was a bit non-descript. The potato scone was a little soggy but still tasted good. The haggis had excellent spicing, which almost made up for the sausage. On the other side of the table, my friend enjoyed his boosted up breakfast but still could help feeling a bit robbed over his meal, claiming “it needed to have breakfast with it”. He also said he wished he’d ordered the full Scottish breakfast and asked them to leave off all the meat.

This did the job but didn’t impress me as much as previous visits.

Cost £23 for two breakfasts, a coffee and a diet coke