Third time lucky. We originally booked to visit Bistro Deluxe by Paul Tamburrini at the MacDonald Hotel at Holyrood several months ago and then changed the booking due to a change in my friend’s plans. We rescheduled, but then we had to cancel due to snowmageddon. Luckily the sun was shining and we made it this time. 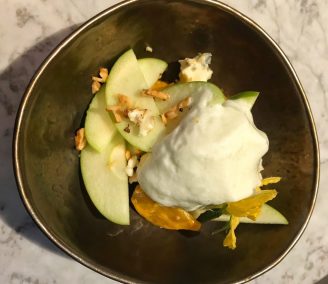 We opted to go a la carte rather than the fixed price menu as there were a few things that caught our eye. There were a few changes to the menu because of seasonal produce. My friend chose a couple of these dishes. I opted for the mushroom veloute followed by Ox cheeks. Jen picked the beetroot, blue cheese and fig starter followed by turbot for her main. The server came back and said that the chef wasn’t happy with the figs (which were already a change from the menu) so would revert back to the apple if that was ok, which it was.

My mushroom veloute was very nice. Thespis-cooked egg nestled in the soup was interesting touch and when cut into, oozed into the mushroom. I enjoyed the little croutons and I also used a bit of the beef served at the table to mop up the last bits of veloute. Across from me, the beetroot was pleasant. The blue cheese and apple added some lovely contrast and served to be a very light starter. 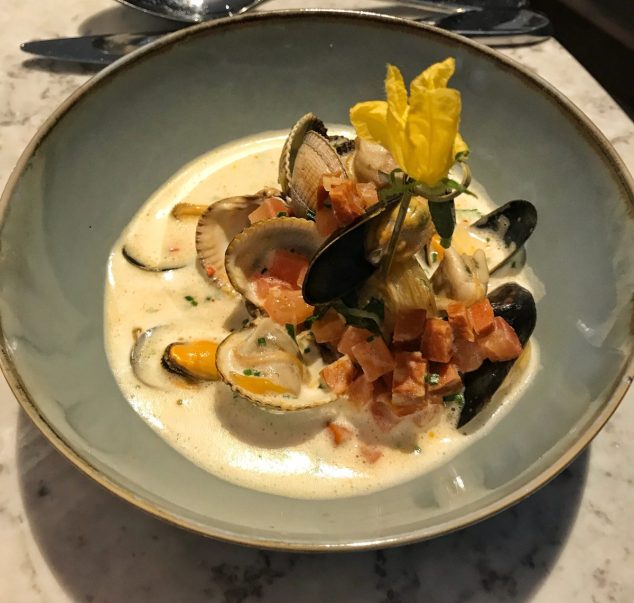 The smell on my main of ox cheeks was beautiful. Maybe a bit of a heavy dish to have on a warm day but I didn’t care, as it melted in mouth. The mash was smooth and the mix of mushrooms, bacon and onions were a delight, if a touch salty. The sauce was rich and had strong depth in its flavour. I was pleased that I was automatically given extra sauce in a jug for pouring. My friend was enjoying her turbot with cockles and a coconut and chorizo broth. It was presented with a pretty flower on top. The flavours were pretty decent but it was a small and light dish for a main. 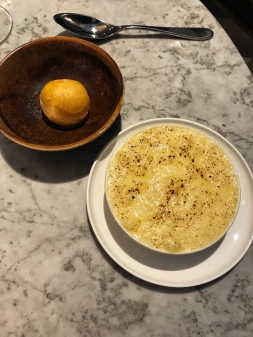 My friend was still hungry after her first two courses, whereas with my more wintery options I was closer to full. She chose to go for dessert and it would have been rude of me not to join her! I chose key lime pie, which was more of a deconstructed pie but was excellent It included a creamy lime parfait, with coconut sorbet and lime meringue. The whole thing was really quite lovely and refreshingly zingy. My dining partner chose the crema catalan foam. This was nice enough but a bit disappointing as she would have preferred an actually crema catalan rather than a foam flavoured that way. It had some great charred pineapple but the chocolate was probably not required. The sorbet was lovely though. We did also have a bit of a wait for these to be served.

Overall they offered nice food but perhaps a bit expensive. The service was lovely but the place lacked a bit of something.

Would I eat here again? Maybe.

£82 for two three course meals and one glass of wine