We book a fancy restaurant to experience each Christmas and this year we chose Restaurant Martin Wishart. We decided so early on, we actually booked our table back in January. We had a little hiccup getting to the restaurant as my friend’s bus hadn’t turned up so we were a touch late but had called ahead to let them know (it’s only polite). It turned we were only late by 5 minutes but we did arrive a little frantically. We were told to relax by the gentleman that greeted us and he arranged for our coats to be taken and he showed us to our table. Restaurant Martin Wishart is situated on the Shore in Leith and its decor is full of biscuit hues and warm, sedate lighting.  The restaurant itself was larger than I expected. However, I have to admit I was a little disappointed to be sat next to the door entrance/exit to the kitchen, which I hadn’t expected after booking so far in advance. That being said, it was a large table with a decent view of the dining room and no-one sat behind us as we were in a corner. We knew we were going to go for a tasting menu but the interesting thing about this restaurant is that they offer 3 types of tasting menu; the classic, a fish/seafood and a vegetarian. All three sounded amazing but we both opted for the classic. Each menu also had a choice of 2 desserts, so we picked different ones, not only so we could see both but because they suited our own palates. 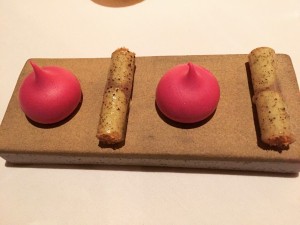 First out was a set of appetisers. One was beetroot meringue with a beetroot cream inside. The other was  a tube with a spiced paste in (I cannot remember what a the ingredients were for this and it’s not on the menu – so apologies). The beetroot was a quick blast of strength of flavour. The tube was a bit sticky and chewy  on the teeth but had lovely taste. We also were offered some bread, with a choice of white or olive sticks. these were warm and tasty. We even had a choice of salted and non-salted butter. It was a shame we then got offered same basket of bread at least seven further times. Whilst it’s good to offer more than one piece, we got a bit sick of having to keep saying no.

Next up was the amuse bouche. This consisted of two small dishes with a fish/seafood theme with a ceviche of scallop and Muscat grape and then tuna with wasabi, cream and a crumb. These were both light but the tuna was my favourite. The wasabi was a perfect accompaniment to the tuna. The two bowls seemed a bit large, particularly as they were being served side by side but that didn’t stop me from enjoying them. 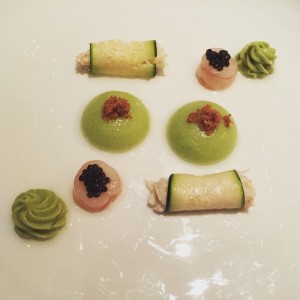 Then onto the first full course; target crab and langoustine. The green hues were pretty on the plate. The langoustine was sweet and topped with a smattering of caviar. The crab was wrapped in a sliver of courgette. The green that looked so pretty added some unusual flavours and textures. The jelly type texture was a little strange and neither of us could decide whether we liked it.

Next up was Orkney scallop and cepe. Now at this point I realised I had lost an earring (one of my favourites) and I forgot to take a photo. I did take one once I realised but it was of hardly any food and a bit blurred with my annoyance so there is none on the blog. However, this was a really delicious dish. The dish had a duck liver pate across the bottom which added a delightful depth. The cepe complemented the scallop. The hazelnuts gave great texture and depth. All in all, a beautifully warming dish. 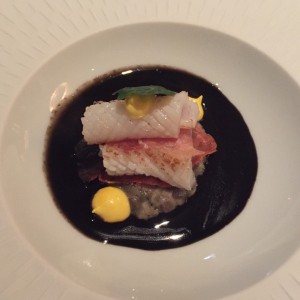 We then moved onto the squid. The squid itself was beautiful. It sat atop a bed of puy lentils, which were nice. The squid ink was poured on by the waitress but on eating I found it almost a bit too earthy for my taste. However, my friend loved it so that was down to preference. The whole dish was visually stunning.

The following course was ravioli of borders partridge. Unsurprisingly, this was delicate pasta. The cabbage helped the dish from becoming too rich and the partridge itself had good flavour. The sauce was enough to keep the pasta moist without overwhelming it. Decent stuff.

What would have been considered the main meat dish was duck. This was soft and had beautiful flavour. the skin appeared to have been cooked separately and then re-laid on top of the slice (as it was a slice and not a breast) of duck. However, I did think the accompanying beetroot and red cabbage somehow didn’t sit right on the dish for me. I almost lost the flavour of the duck. The redcurrant sauce, whilst a vivid pink, was nice enough though.

Pre dessert palate cleanser the appeared. This had a pineapple base, topped with coconut cream, basil and kiwi. This was new on the menu that evening. The kiwi was refreshing but the cream seemed a little odd to use for a palate cleanser. 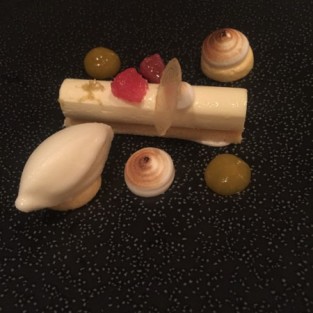 Then we had our desserts which, as I mentioned earlier, came as two different options.  We initially got given our desserts the wrong way round which was a little surprising considering the standard of the restaurant. I had opted for the spiced valrhona chocolate, which consisted of pineapple, a chocolate tuille, clementine sauce, mandarin sorbet and a chocolate mousse.  The sauce and the sorbet seemed to clash a little but otherwise a pleasant dessert. On the other side of the table, my friend had chosen the lemon bergamot cremeux. This was very pretty on the plate and consisted of a yoghurt sorbet and some pink grapefruit meringues. The meringues were cute and my friend lapped up the whole dish. 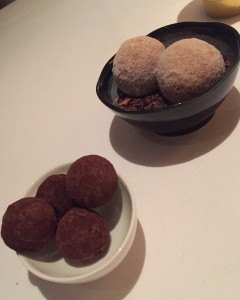 We chose not to have tea or coffee but we still received some petit fours, which turned out to be the best bit of the meal. The came in two forms; apple and cinnamon mini donuts and salted caramel chocolates. The donuts made me giggle with delight and the chocolates oozed with luscious salted caramel.

Overall whilst the food was good, we felt the overall experience was a little underwhelming. There was no calmness to the dining room with the waiters close to breaking into a run as they came in and out of the kitchen around every 15 seconds. We also weren’t full afterwards, which was a bit weird. Perhaps we should have had that bread after all.

Cost £165 for two tasting menus and one glass of wine.