A friend and I had taken a trip up to Edinburgh Zoo to see the Giant Lanterns of China and it subconsciously got us in the mood for Chinese food. We headed back into town and had originally intended to visit Rendezvous but it was closed for a break, so we wandered along to The Golden Dragon Restaurant. It’s one of those places in a central location but so easily overlooked. Inside, the Golden Dragon is an old style Chinese restaurant – so nothing flash but focussing on great food and warm hospitality.

We settled down to look at the menu and I was delighted to spy char siu dumplings, so opted for that immediately. I added some deep fried shredded beef and my friend chose salt and pepper prawns to start and chicken satay for main. We decided to share mains so also got some egg fried rice between us. After ordering my friend spotted a sign on the wall saying their customers rated the shredded beef the best in Edinburgh. A bold claim that we could test them on. But first, the starters. 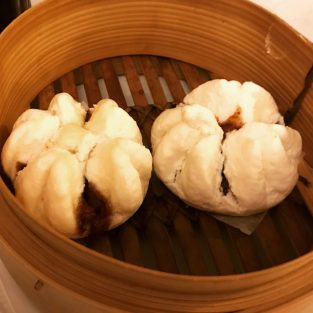 My char siu dumplings came as a pair and were white and fluffy on the outside and full of tasty pork on the inside. Not too spicy, these buns are quite filling but so satisfying. Across from me, the prawns sat on top of a bed of salad. They were coated in batter and chillis were scattered across the dish. My friend heartily enjoyed this starter, finding the prawns of good quality and size and the flavour was hitting the spot.

The mains came along not long after and smelt divine. They say you eat with your eyes, but your nose also plays a part and it was telling me to hurry up and get stuck into the delicious smelling food. The deep fried shredded beef was quite subtle in its appearance, unlike other places where it’s been day-glo orange. The beef was crispy rather than chewy and the coating didn’t hide the beef. The sauce itself was full of depth and complexity that surprised me. Spring onions gave a nice contrast too. I have to say, it is definitely the best deep fried shredded beef that I have had in Edinburgh, and possibly ever. The satay was also ticking all the flavour boxes. The chicken was moist and the vegetables not over cooked. The satay sauce itself was not too thick and had a gorgeous nutty tasty. The egg fried rice worked well between the two of us and mopped up those sauces well.

This was a wonderful find and somewhere central that gave a satisfying meal. We really enjoyed the food.