I visited Burger Meats Bun when it first opened and I have been meaning to go back since, particularly as it is a stone’s throw away from my flat. We had a voucher deal which gave us the perfect opportunity. Burger Meats Bun started out in Glasgow but ventured east to Edinburgh. It’s a burger place with a twist, having specials that delight and surprise. They serve their food as if you were in a fast food joint but that doesn’t mean it’s of the same standard. Their Twitter and Instagram feeds should be enough to convince you that they offer a lot more. 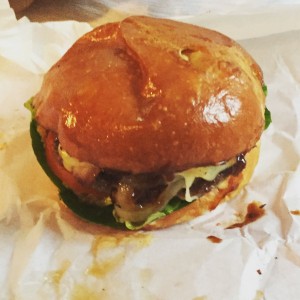 We were welcomed by friendly staff who were up for a bit of playful chat. The restaurant was very busy but we surprisingly didn’t have to wait to be seated and the food didn’t take as long to arrive as it might have done. The deal we had covered two burgers. The specials burgers would cost an extra £2 and all drinks and sides were extras. I went for a Big Cheese and my friend went for a Smokin’ Bacon. We decided to opt for a side of the special ‘Kim cheese chips’ to share, which were fries smothered in cheese and kimchi. 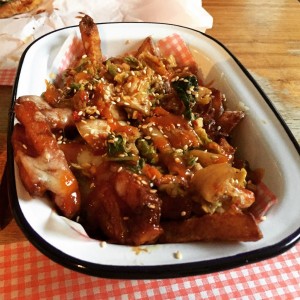 Burger Meats Bun offers very hands on dining. We were given a kitchen roll for napkins. The food arrived and the burgers were wrapped just like a chain burger place but the chips came in a tray. We weren’t given cutlery. I think this was an oversight as we saw other diners getting some but this food generally doesn’t need cutlery to eat, so we just got stuck in. The burger was tasty and was seasoned well. It had pickled cucumber in it and to be honest, I would have preferred an actual gherkin if you insist on putting these things in a burger but maybe that’s just personal preference. The brioche bun gave a really nice flavour but did end up a little soggy by the components of the burger, which is where the cutlery may have come in handy. The chips were actually incredibly good. I had tried the Thai sweet chilli cheese chips when I was last here and enjoyed them immensely but these were also of a very high calibre. The kimchi added a lovely layer of flavour and the sprinkled sesame seeds were a nice touch.

Burger Meats Bun offers good, solid food and their specials always seem to offer something a little different. This place is certainly worth investigating.

Cost – Voucher deal £9 for two burgers. Extra – chips, 1 beer and 2 soft drinks came to an additional £10. Without the voucher the cost would have been around £28.