We had an early booking at LeftField. Overlooking Bruntsfield Links, LeftField is tucked away but worth hunting out. Whilst understandably quiet at the time of arrival, this place was bustling fairly quickly. We were left a little confused when provided with menus as we soon realised that we didn’t actually have the same menu. Once cleared up (one of us had been given the Christmas party menu), we both ordered identical meals of crispy fried squid and sirloin steak with garlic butter. 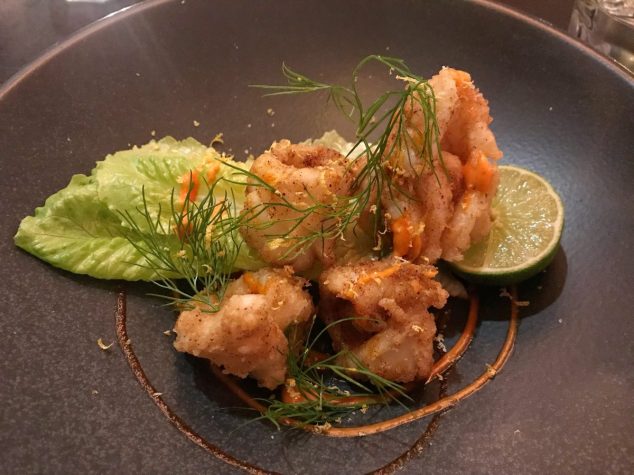 The crispy fried squid was plentiful and tasty. Lime on the side meant I could get my lime hit. This worked beautifully with the sriracha mayo and balanced the heat out. The squid wasn’t rubbery or tough. A very pleasing course.

Next up was the steak. Both were cooked to our preferences and served with a small pot our chosen sauce – garlic butter. The steak was juicy, made even more delicious by the butter. The steak came with chips and a side salad. The chips were fab but I would have liked the option of a sauce for these (does that make me uncouth?!). The salad was fairly standard but the addition of spring onions did lift it a bit. 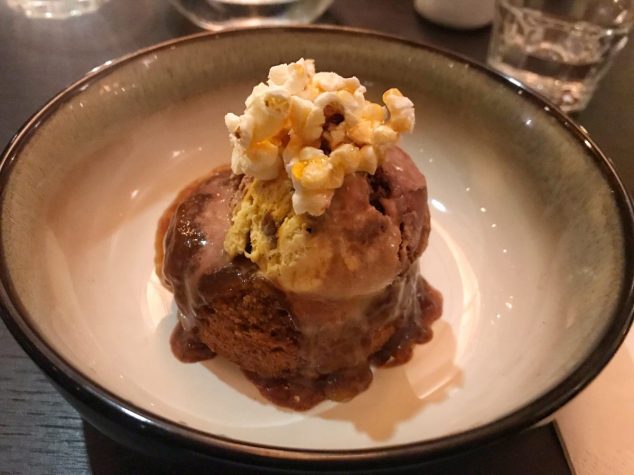 We had room for dessert and, you guessed it, we ordered the same dish. Sticky toffee pudding was calling both of us. On its arrival, we were delighted to see it was topped with popcorn. A little unorthodox maybe but tasted good nevertheless. It was a shame that my friend has a bunch of unpopped corn in hers as I didn’t get any. That aside, the pudding was full of warming flavour, with a beautifully yummy sauce. This contrasted well with the cold ice cream. This was definitely a crowd pleasing dessert.

LeftField has a few wrinkles (including an odd Christmas playlist that they ended up changing) but is generally offering tasty food in a relaxed setting.

£77 for two three course meals, a glass of wine and a gin and tonic