As soon as I heard Six by Nico was opening in Edinburgh I was excited, as were the rest of us Edinburgh foodies. The concept is clever, certainly for creating repeat customers. It’s a set menu (including a vegetarian alternative) and every six weeks the menu will change. Each menu has a theme and the first theme for Edinburgh was ‘The Chippy’. My friends and I booked a table a good way into the six week run, so it was torturous watching fellow foodies photos appear on Instagram, whilst we waited. 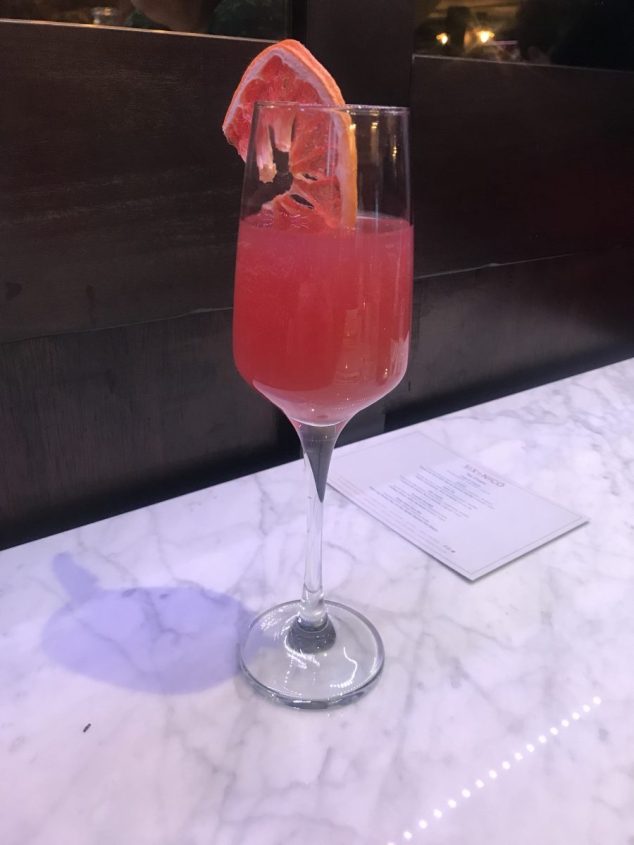 The place was buzzing when we arrived. Not many restaurants in Edinburgh are this busy mid-week. We were sat at the front of the restaurant. To be honest, our table for four really should have been a table for two as we were squished in next to the station for waiting staff. Luckily there were only three of us. A minor quibble though. If you wished you could order some additional nibbles but we decided not to spoil our appetites. I ordered a cocktail and my friends chose the paired wines option, which is quite reasonable for £25. 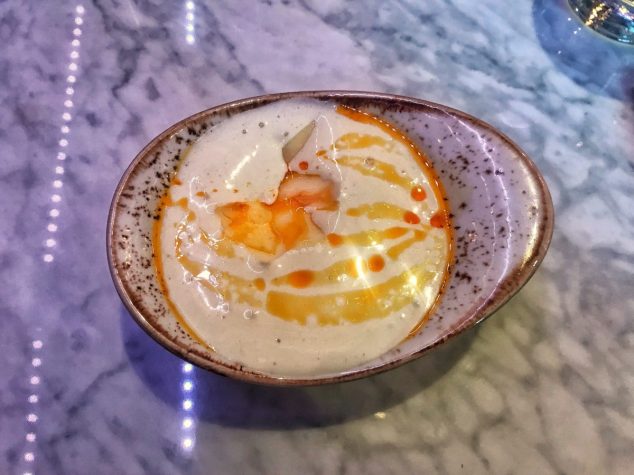 ‘Chips and Cheese’ – Six by Nico

The first course out was ‘chips and cheese’. Of course, this was no ordinary chips and cheese It arrived in a small bowl, with crispy, finely chipped potatoes covered in a wonderfully light parmesan espuma and a drizzle of curry oil. Oh my word, this was delicious. It had bags of flavour and danced on the tongue. We all said we could eat several more bowls of the stuff. Yum. 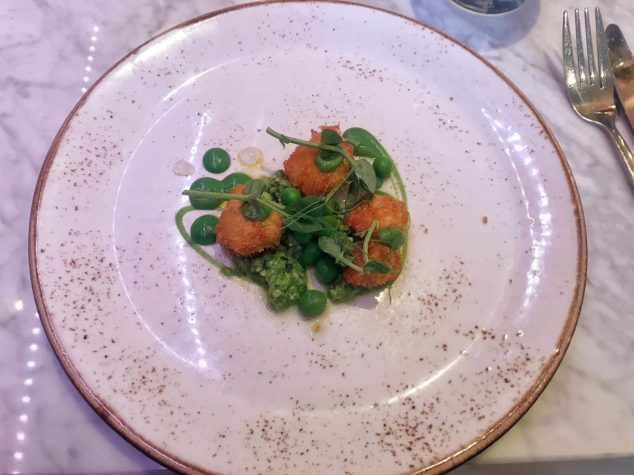 Next we had ‘scampi’ which actually was Scrabster monkfish cheek, with pea ketchup, herb pesto and bergamot. Whilst there was no matched wine with the first course, the one expected for the this one wasn’t delivered and had to be chased. That aside, this plate of food was wonderful. Light and delicately playful flavours made for a tasty experience. The bergamot was the surprise element, with gentle citrus notes. 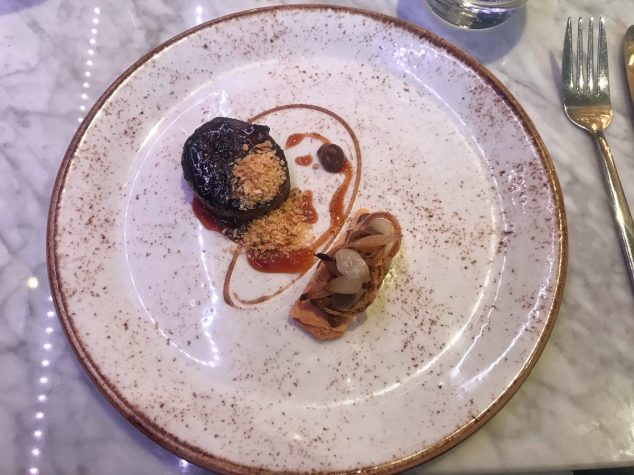 Then we moved onto ‘steak pie’. This consisted of Speyside beef shin, charred and caramelised onion and red wine. The matched wines came out early for this course and all our remaining courses – all is forgiven. The beef on this dish just fell apart beautifully. It was succulent and melted in the mouth. The textures were spot on here. Another champion of a dish. 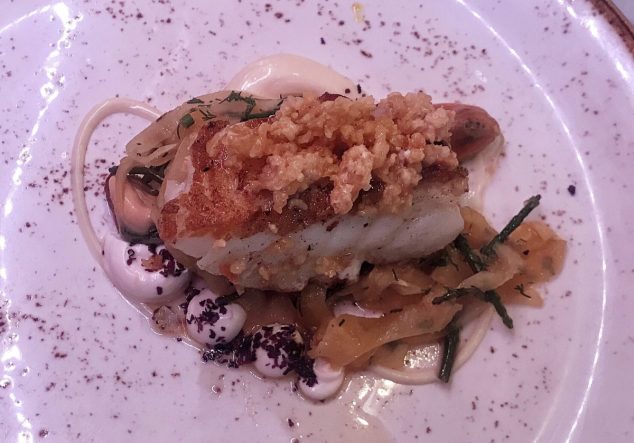 Next up was ‘fish supper’. This was Shetland cod, beer emulsion, pickled mussels, confit fennel and samphire. The fish flaked apart wonderfully. The beer emulsion surprisingly working well in a subtle way. The little scraps on top of the fish were a delight and I even liked the confit fennel, which is usually my foe, as is had an unusual sweetness to it which complemented the pickled mussels. 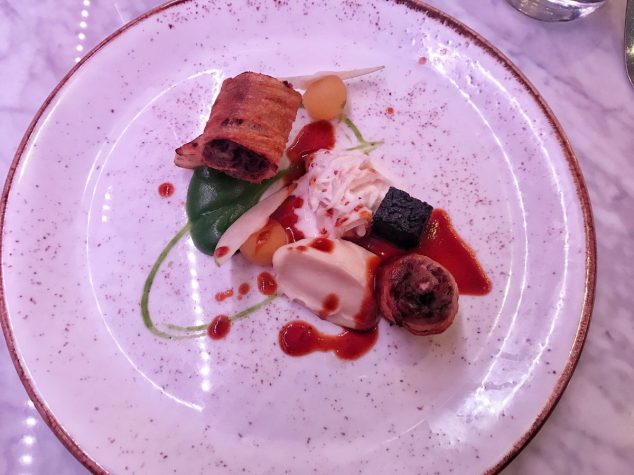 The next course was one we were seeing be delivered across the restaurant to other tables so we knew what was coming. Arriving in a smoked closh, the lids were lifted and a beautiful smoke and aroma filled the air. This was ‘smoked sausage’ and was Ayrshire pork, salt baked celeriac and caramelised apple. The sausage itself wasn’t a sausage but the pork wrapped up in the shape of one by potato and the smoke lightly permeated the meat. The celeriac was nicely balanced. I really enjoyed the apple elements of this dish, finding them pleasantly contrasting with the meat, but one of our group found it a little too tart. 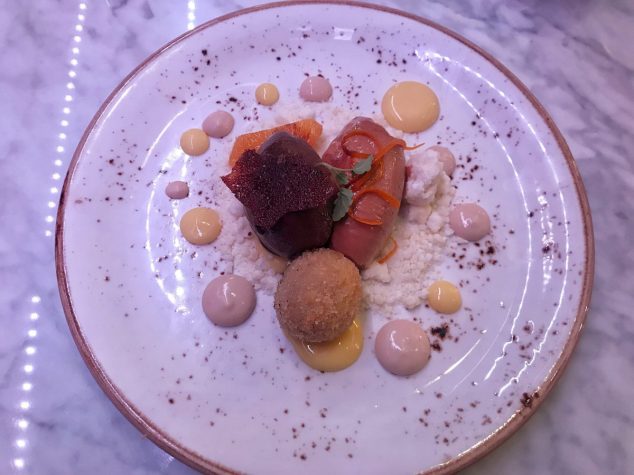 The last course was dessert. Called ‘deep fried mars bar’, I was looking forward to this. Although I’ve never tried a deep fried mars bar, so actually have no comparison. The plate had chocolate sorbet, mousse, orange and caramilla nougat. Now this isn’t going to be everyone’s type of dish. It was quite sweet but I was totally enamoured with it. The squeals of delight as I tucked into the caramilla nougat couldn’t be contained. It wasn’t to everyone’s taste on the table (those with the paired drinks also got an irn bru concoction as well)as it was sugary, so I finished off their plate too! Loved it. 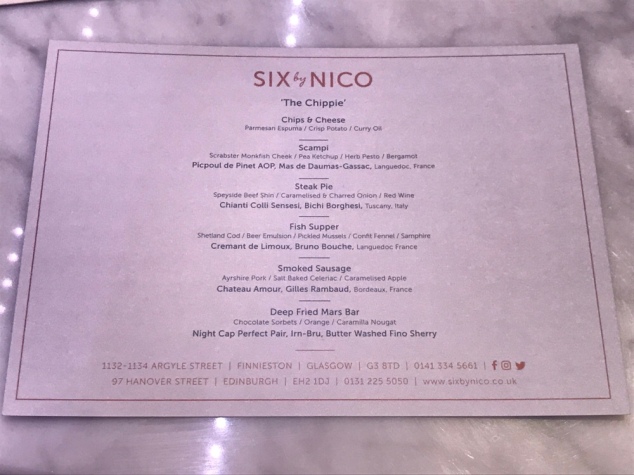 Menu ‘The Chippy’ – Six by Nico

We had to wait a little while for the bill, which was a little frustrating, but otherwise we had good service. The food was great and definitely has me hooked. The next six week stint has opened up for booking – Cooking Wonka. Yes, I already have my reservation sorted.

2 thoughts on “Six by Nico”