Forage and Chatter is a little hidden away on Alva Street but its pretty lighting points the way. In the location where Edinburgh Larder was, Forage and Chatter aim to provide excellent, locally sourced Scottish cuisine. We were warmly welcomed and led to the seated area at the raised back portion of the restaurant. Even with other diners seated in this area, the tables were spaced out well. The menu itself had lots of choice without being over facing and I settled on the onion tart to start, followed by aged beef sirloin. My dining companion chose langoustine bisque followed by monkfish. I was then presented with a selection of brightly coloured handled steak knives to pick from, which was an unusual but nice touch. Whilst we were waiting for our food, we were brought some fried dough balls with a mint pesto and a whipped yogurt butter with mushroom powder. These dough balls were delightfully warm. I preferred the butter option and my friend liked the pesto but both were excellent. 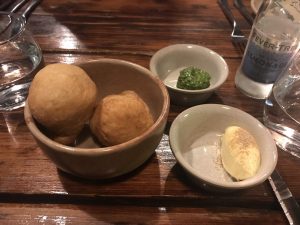 The starters followed shortly after and both were beautifully presented, although some of that was lost for the langoustine dish when the bisque was poured. My onion tart was not in the form of a traditional tart but in this case, that was not a bad thing. The varying textures of onion worked well on top of a pastry strip. The black garlic puree was outstanding and the small dollops of goats curd with herb oil nestled in small onion leaves was a graceful and clever touch. Across the table, the bisque was working its magic. The langoustines were complemented with mussels, leek and fennel. This dish managed to be hearty and delicate at the same time. We were very excited to see whether the high standard continued on to our mains. 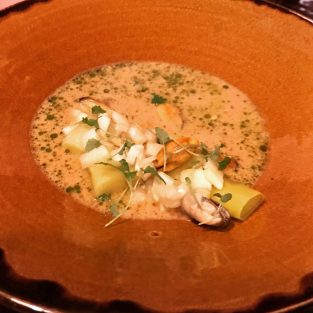 The answer was yes – there was still an exceptionally high standard. I only have one negative, and it’s not my own personal negative but one I think other diners may have. I was told the beef would arrive medium rare. I like rare anyway, so this was not a problem. However, on arrival I would definitely say it was rare, which was great for me but may make others a bit twitchy. That aside, this dish was phenomenal. The meat was full of wonderful flavour. Alongside it was ox tongue, wild leeks, mushrooms, ramsons and persillade. Each element added an interesting dimension to the dish and made the entirety sing in my mouth. Across the table, the monkfish almost glowed with whiteness on top of a bed of puy lentils. Bacon, capers and parsley were mixed through the lentils. The fish was cooked to perfection and the whole dish worked in harmony. The attention to detail in putting these dishes together is clearly evident. 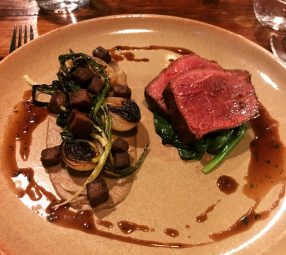 As the courses were reasonably sized, we actually had space for dessert. Again, the list made it incredibly difficult to choose as I wanted them all. I settled on the Vahlrona dark chocolate mousse and I wasn’t disappointed. The mousse was supplemented with malt ice cream, marshmallow and sable crumbs. The textures and tastes in this dessert were amazing. I oohed and aahhed all the way through eating it. I certainly found my happy place whilst eating it. Across the table, my friend had chosen my back up choice – apple, oat crumble with salted caramel ice cream and custard. She allowed me to try some of the ice cream and it definitely was exceptional. My friend doesn’t do desserts often and actually commented that she could have eaten that dessert all over again. High praise indeed. 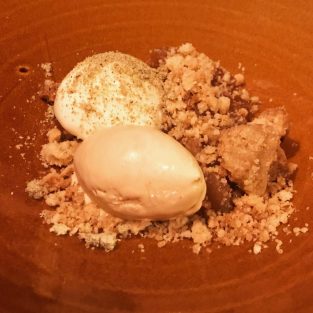 We were mightily impressed with our dinner at Forage and Chatter. It is definitely worth visiting, and more than once.

Would I eat here again? Yes, and possibly dream of it in the meantime

Cost £79 for two three course meals, a large glass of red wine and a raspberry gin with lemonade

One thought on “Forage and Chatter”