It was the birthday of a dear friend and occasional ‘Feasts dining companion, and she had chosen Herringbone for a low key birthday get together. Herringbone has two places, one in Goldenacre and one in North Berwick. We were at the Goldenacre branch, which has a nice corner location and large windows. The slightly mismatched chairs at our table meant we had to do a few seat swaps so the taller of us weren’t towering over the smaller in the group. All settled, we started drooling over the menu. There was plenty of choice and everyone was struggling to pin point exactly which dish to opt for. Half price cocktails are also available from a smaller list, Monday to Thursday, although the prices on the flyer were more expensive than those on the main menu. Presumably that is the full price charged rather than the cost at half price. In the end I was the only one having a cocktail and I picked from the main menu. We had already got a sharing platter voucher from Itison (with two glasses of wine), which we were going to use as a table starter, so we only needed to focus on mains. I went for the black pudding and chorizo salad. The rest of the table chose two salmon burgers, the rib-eye steak, the gourmet lamb burger special and the chickpea burger.

We had a little wait for the sharing platter but it eventually came out. We had selected the meat option (there was also a fish or veggie platter to choose from). This came with deli meats, bread, pate, chicken skewers, pork belly bites, rocket with peppers and olives. We were all very impressed with this platter. Once we got over the typical politeness of how we were going to share this between the six of us, we got munching and all got to try a bit of everything. The pate was the winner of the platter but shortly followed by the chicken skewers which were incredibly succulent.

We had a bit of a wait for our mains and they weren’t brought out completely together. However, once we got going, there were lots of satisfied noises emanating from the table. My black pudding and chorizo salad was a hearty portion, with plenty of meat but still enough salad to feel like you were making a small contribution to healthy eating. The salad consisted of salad leaves, onions and tomatoes, all of which were fresh and vibrant. The black pudding was in rather hefty chunks but resulted in a very generous portion and worked harmoniously with the chorizo. On top, were crispy onions, which added some further texture, along with two poached eggs, which oozed beautifully golden yolk across the dish. I couldn’t finish it (who ever normally says that about a salad?) which is testament to the weight of the dish. Around the table, the variety of burgers were getting the thumbs up. The salmon burger was particularly popular and the flavour in the chickpea burger was great – although the flatbread it came with was too crispy to wrap around anything. The steak was also of a good standard but what won everyone over were the chips. Wide but also thin, the chips had a good crispness to them. 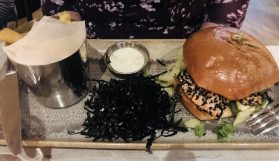 Only a couple of the group went for dessert as most of us were stuffed. One friend chose ice cream and the other a cherry, liquorice and blackberry dessert. Both of these desserts were decent and provided a satisfactory end to the meal. 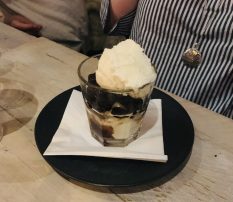 Overall, whilst the service was helpful it was often on the slow side. Herringbone was busy for a Tuesday but it was still a bit annoying to have a long wait. Additionally, it was lucky – as we’d had varying amounts – we were paying for our own meals rather than splitting the bill equally which meant we spotted that they charged us for the voucher including the wine and we had to ask to have this taken off. A very disappointing end to what was a fairly good meal.

Would I eat here again? Yes but not when I was in a hurry and I would always scrutinise the bill before paying.