Café Tartine is a family run French bistro found on the Shore. As the nights are drawing in, Café Tartine offers a cosy experience with candles in wine bottles scattered about the room. The menu covers the A-Z of rustic French food. I chose the chicken liver parfait, followed by pan-seared fillet of salmon. My dining companion opted for the French onion soup to start followed by mussels with fries.

As the starters were delivered to our table, we could see we were in for a lot of food. My parfait was delivered on a wooden board, with two large slices of toast, salad and a small pot of cranberry and orange jam. The parfait was wrapped in a slice of prosciutto which I am not sure added much. However, the whole dish was lovely. Even the salad was dressed well. I would have liked a little more of the cranberry jam but that’s more of a personal preference. Across from me, my friend had been given a ginormous bowl of French onion soup. She lapped up most of it though as it was so delicious. I also had a try of it and think this would be a great choice for lunch on a cold winter’s day. This soup also came with some large chunks of bread. 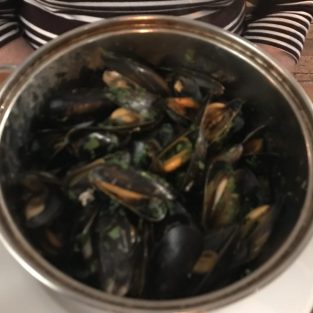 The mains were just as generous as the starters. My salmon was an incredible size. I had never had salmon skin so crispy either. The fillet sat in a pool of mussel veloute, which was truly beautiful. A handful of mussels, still in shells, were placed around the dish. To finish it off, there was samphire, green beans and a luscious pomme puree. It was so good that I ate way past the point of fullness! My friend was tucking into her large pot of mussels and accompanying fries. They were of good quality and the sauce was good. For those who can’t face a kilo pot of mussels, there is also a half kilo pot available on the list of starters.

We were way too stuffed for dessert, which was a shame as they looked really good. I would happily have the dishes a little smaller for a pound or two cheaper so I could fit in something sweet at the end. That being said, we left very content with what we’d eaten.

Would I eat here again? Yes (that mussel veloute is still making me smile)

Cost £55 for two starters, mains and one large glass of wine.