Nestled in the west end, The Voyage of Buck manages to feel old, traditional and modern all in one go. We were warmly welcomed by the staff and seated quickly. We got some cocktails from the menu, which was themed on cities around the world. These were excellent. The Per La Donna was our favourite as it was refreshing on such a warm day. Whilst sipping on our drinks, we ordered food. I went for duck followed by sea bass, one friend chose squid followed by chicken and last of the group chose bread from the bar food list followed by a main of pork loin. 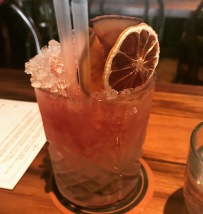 My starter was incredible. The duck was smoked and full of flavour. It was accompanied by amazingly zingy pickled asparagus, cauliflower and sweet potato purée. I adored this dish as it seemed to dance on my tastebuds. Across the table, the squid looked pretty, served with heritage tomatoes and cashew purée. This was enjoyed and the plate emptied quickly. The bread however, was a little disappointing and expensive for what it was. Served with extra virgin olive oil and crema di ancardio, the bread itself tasted as if it had been slice a while ago and had dried out a bit.

My main of sea bass was served with mussels and mussel broth, rainbow chard and samphire. The fish was cooked well and had brown crab mayonnaise dotted on top. The mayo didn’t have a flavour strong enough to combat other flavours on the dish though. I was a little disappointed that some of my mussels were not open. It’s just about acceptable in a bowlful of mussels but these must have been placed on the dish so should have been checked. The broth made the chard a bit too soggy but the samphire was lovely. The chicken dish was going down well and was moist but she didn’t get to eat much of it as the friend eating the pork was not aware that nduja was a spicy sausage so found her dish too hot. She swapped with the friend eating chicken but credit to the server who had offered to get a different dish cooked (the waiting wasn’t worth it when a swap was fine for all parties involved). My friend did recommend that it was indicated that the dish was spicy on the menu – I hadn’t realised she didn’t know. However, was a shame she had to pass it on as it did come with an incredible buckwheat risotto. The friend now eating this dish really enjoyed it. The presentation of it would have been better if it hadn’t been covered with green leaf. 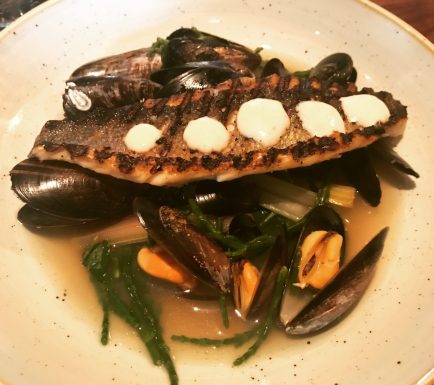 Two of us had desserts. I went for the warm toffee frangipane tart with honeycomb ice cream. This was exquisite. Every mouthful was like a warm hug. My friend chose the chocolate delice. This came with clotted cream, orange and whisky (which wasn’t too overpowering). This dish was good even though it was a bit rich.

Chocolate Delice – The Voyage of Buck

We did enjoy our meal but there was a few things that prevented it from reaching its potential to be excellent. There were definitely hints of magic though.


Would I eat here again? Yes, my starter and dessert were particularly special.