I’d visited The Devil’s Advocate for drinks a few times and once had lunch (but only had soup so felt it was too little to review on) so we finally got round to having dinner here. The Devil’s Advocate is a sister restaurant to both Bon Vivant and El Cartel so we expected a decent level of food. Would they be up to the challenge? When we arrived, the place was heaving, not only with after work drinkers but the dining area was completely full too, so I am glad we booked. However, if you like quiet places, this might not be for you at this time of day. Either a lunch or a later dinner may be more suitable when the place is a little quieter. We were shown to our table and we got onto perusing the menu, which is relatively short but with enough choice. I chose the wild mushrooms with pan fried chorizo followed by the garlic and rosemary picanha (also known as the sirloin cap or rump cover) with a béarnaise sauce. My dining companion for the evening went for Serrano ham with sourdough toast followed by lamb neck fillet.

The starters looked good on arrival. My little bowl looked quite dainty in comparison to the Serrano ham dish. My bowl has lots of wild mushrooms and pieces of chorizo, sitting in a bed of rocket with rosemary croutons and a garlic puree. Whilst I generally loved the dish, there was a fair whack of salt on it, which in the first couple of mouthfuls was a little overpowering. On the other side of the table, my friend was a little disappointed that the toast was in fact dried bread and was not sourdough. However, this was made up for with the delicious ham, cheese, olives and incredibly tasty romesco sauce. This was also quite a generous portion with massive chunks of bread (apologies for the slightly blurred photo). Generally we enjoyed the starters but they weren’t quite 100%. 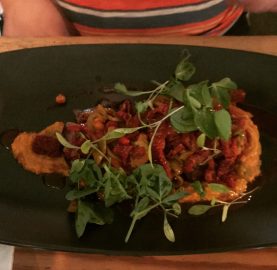 The mains, however, were something to behold. My picanha was cooked as requested (rare) and full of juicy flavour. There was plenty of it too, to my delight. Alongside the meat was a beautiful béarnaise sauce which was simply perfect. The accompanying vegetables consisted of a grilled piece of butternut squash, grilled tomatoes, a portobello mushroom and rocket. These were all delicious and balanced out the beef well. The same positive reactions could be found opposite me. The lamb neck fillet was equally tasty. It sat on a bed of roasted red pepper and chick peas. Some of the chickpeas had been kept whole for added texture. This was accompanied by a sun dried tomato, garlic and olive salsa. My friend completely cleared her dish and probably could have licked the plate! 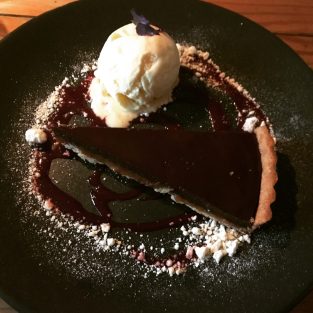 We decided that as the courses weren’t too large we could squeeze in dessert. I had a chocolate torte, which came with ice cream. The torte itself was rich but gloriously chocolatey. The base was just the right consistency . The ice cream helped cut through the richness of the chocolate, along with a berry coulis. The panna cotta across from me was also a success. It had great flavour. The only complaint was that the rhubarb was not a compote but luckily there was also a berry coulis which worked well with the panna cotta.

Overall, we really enjoyed our meal and the venue. Definitely worth a visit.

Cost £75 for two three course meals plus a glass of wine.