This was a long overdue catch up with fellow bloggers Emma from Vegan Edinburgh and Ann from A Quirky Lifestyle. We usually let Emma pick the venue as her requirements are a higher priority. She was shocked to hear that whilst I’d had take away from La Favorita, I’d not actually dined in. Ann hadn’t either, so this had to be rectified. I booked a table, and we were given the opportunity to give any dietary requirements and to let them know if the booking was for a special event. So we forewarned them that we had a vegan in our midsts.

It was a little hectic on arrival, with little space by the reception desk, which is situated after the bar area. Our table wasn’t ready so we sat in the waiting area for about 5 minutes or so before being seated. Once seated at our table, Emma double checked the vegan options (click here for the Vegan Edinburgh review) with the waitress. After scanning the generously sized menu, I went for the calamari fritti followed by a 10 inch Hawaii pizza (14 inch are also available). Emma chose bruschetta followed by the vegetariana but with vegan cheese substituting the standard cheese. Ann went for crocchette di merluzzo (fish cakes) and asked for a pizza recommendation from the waitress. She gave three options and Ann chose the Campione di Scozia. A G&T, Diet Coke and a cocktail were also ordered (the latter again on recommendation of the waitress). 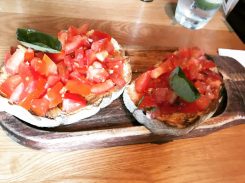 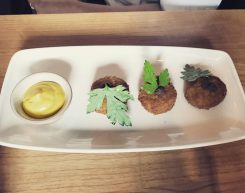 When the first course came, they were in a variety of sizes. The bruschetta was huge and the fishcakes were small and my calamari fritti were somewhere in the middle. The fritti actually consisted of both baby squid and anchovies. The squid was nice, particularly when dipped in the garlic mayonnaise. However, I was a little disappointed with the anchovies as they were unbelievably salty. They also broke as you tried to pick one up, so it almost ended up as a salty, fishy crumb, which was a shame. The bruschetta was large so if you don’t eat it quickly the bread can become a little soggy. However, it went down well. I think just be mindful of portion sizes and balance it well with your choice of mains. The crocchette di merluzzo were also being enjoyed and the plate was cleared. 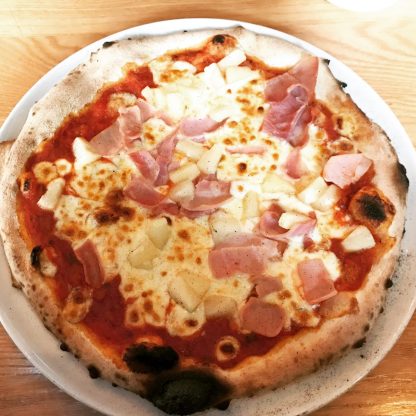 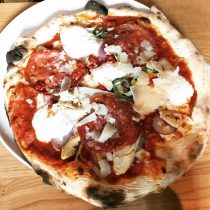 The pizzas followed shortly after and the 10 inch pizzas were definitely big enough after a starter. There was plenty of topping on my pizza and the flavours were really good. I love a good thin base and this was pretty decent. I couldn’t manage to finish it all though but had made a valiant effort. The Campione di Scozia pizza was generally well received but she found the cheese a little too much. She didn’t make as much headway with her pizza but was offered a take out box in order to transport it home, which she took them up on. The vegetariana was wolfed down. It appeared that the way La Favorita dispersed the vegan cheese as a topping has changed by using smaller cubes, making the pizza much more enjoyable. A thumbs up for the vegan option.

We were all way too stuffed to have dessert, but La Favorita offers some decent pizzas.

Would I eat here again? Probably

Cost £63 for three starters and mains plus a cocktail, a G&T and a Diet Coke