Several of my friends and I had been eyeing up La Petite Mort for some time. Situated in Tollcross, handily around the corner from the Kings Theatre, La Petite Mort, from the outside, is an understated affair but on the inside feels more grand in its own way. The menu isn’t long but is varied enough that everyone should find something they like (or like me, want absolutely everything on the menu). I opted for the crab mascarpone and chive parcels, followed by sun dried tomato crusted cod fillet. Around the table, others chose the assiette of beetroot and the leek wrapped duck for their starters, and selected roast rump of lamb, roast pork belly and open veg pie for their mains. Our host/waiter for the evening was excellent, coping with our enthusiasm with grace and humour. We also ordered a round of cocktails which were divine and very reasonably priced. 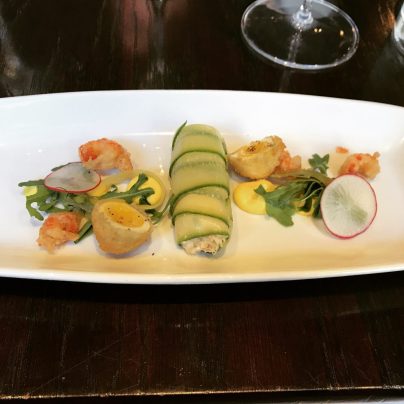 Our starters all looked very elegant on arrival. My crab mascarpone and chive parcel was actually singular rather than the plural advertised but was of a good size. The flavour was fresh but mildly tainted by a little bit of crab shell, which was the only downside I encountered. The breaded quails egg was beautiful, with the yolk rich and runny. I adored the crayfish popcorn, which was not greasy in the slightest and still allowed the crayfish to sing. The radish salad was accompanied by a pretty saffron mayo which brought the whole dish together. Another friend who also had this dish had nothing but praise for it. Around the table, the beetroot dish was also producing smiling faces. The beetroot was given a multitude of treatments by the chef and accompanied by some delicious goats cheese. The leek wrapped duck was a terrine, which had a port and prune puree dotted along the side for some moistness. This dish had great flavour. All in all, a successful round of food. 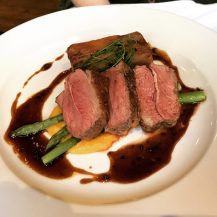 The mains came out quite quickly after the starters. There was no doubt that the roast pork belly was the most visually impressive dish. It was probably the largest of all the mains too. However, firstly, apologies that the photo I took of my cod did not turn out, so I will do my best to describe it well. The fish itself was perfectly cooked and flaked effortlessly. On top of the fish was a vivid sun dried tomato crust, which complemented the fish well. The fish sat on top of a sweet potato fondant, which melted in the mouth. There was also a black sesame sphere, which had a mouse like consistency and coated with the elegant seeds. This was sat atop some delicious greenery. The dish was light and elegant without being too fussy. Next to me, a friend was tucking into the open veg pie. She excitedly got stuck into the beetroot, spring onions, roasted carrots and artichoke that sat underneath a puff pastry crust, which was cut into two large triangles. The roast garlic mayo and pea puree topped it off nicely. A substantial vegetarian dish. Across the table, the lamb was beautifully cooked. The friend eating this dish really couldn’t fault it, describing it as ‘flavoursome’. The meat had a pink glow to it and sat atop butternut puree and asparagus, with beetroot dauphinoise potatoes on the side. The mint jus was generous but at the same time not overwhelming the plate. Lastly, the remaining two diners were gorging themselves on the roast pork belly. The meat itself was a giant hunk which sat on a black pudding and basil mashed potato. The mash had really good taste and texture. Alongside the meat was a smoked pork collar croquette which the pair of them raved about. Neither of them could believe just how much flavour had been packed into the croquette. The greens were provided in the form of kale and the whole lot was topped with a honey and apple jus. The crackling really was made exceptionally well. You could hear the pair of them crunching on it. However, sadly one of them who had a slightly susceptible tooth managed to break said tooth on it. This did not deter her enjoyment of the dish but perhaps those with more delicate mouths might want to pick a different option. She still thought it was a cracking (!) dish. It did send us into a fit of hysterics though as we worked our way through similar puns, so apologies to any of the other diners we may have disrupted. 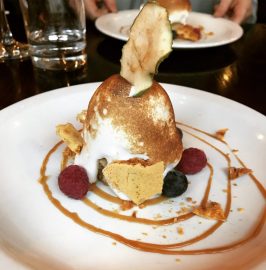 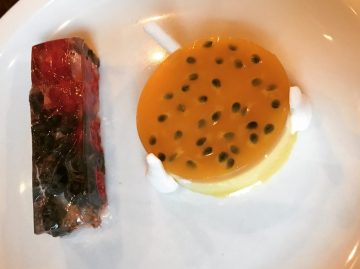 We had a little time to let our food go down before ordering desserts. All of us, except the less enthusiastic dessert eater, immediately went for the salted caramel baked alaska. The other friend felt she wouldn’t be able to fit in the cheese (although it really is at a reasonable price), so went for the slightly lighter passionfruit bavarois. The baked alaska was impressive on arrival. The meringue was superbly toasted, with a little dehydrated apple crisp placed at the top. The ice cream inside was still perfectly set and underneath was a small disc of sponge. This was all delicious. On the side was some heavenly honeycomb, which dissolved on the tongue. Some sauce and fruit scattered across the plate added balance. We all enjoyed this dish. The bavarois was also good, with small pieces of meringue placed around it. Next to the bavarois was a elderflower and summer berries jelly which was light and refreshing.

I think we all thoroughly enjoyed our meal, even if there were a couple of mishaps along the way. I think you’ll see from my scoring below that this is somewhere really quite lovely and very much worth a visit.

Would I eat here again? Most definitely.

£216 for 5 starters, mains and desserts, 5 cocktails and two bottles of wine

One thought on “La Petite Mort”