Enticed by some photos on social media, we decided to give Bubba Q a try. Situated on the Royal Mile, down a small staircase, exposed wood is the theme of the day. The menu has a lot to admire, with burgers, sandwiches, hotdogs, mains and even salads for the health conscious. We both ended up going for sandwiches, mine a Hot Links SW and my friend’s a Triple P. Both came with slaw, pickle and skin on fries. My dining companion also chose BBQ pit beans as an additional side. 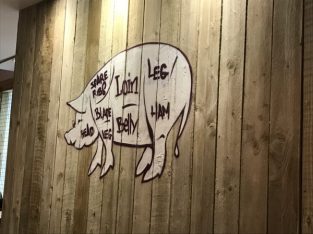 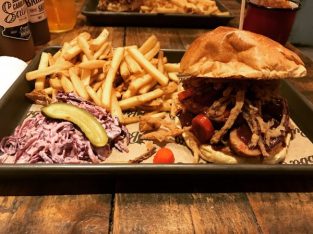 The food came out incredibly quickly. Served on big metal trays, they were generous portions. There were a few home made sauces on the table to try, alongside the more standard condiments, which were very nice. There was no way I was going to be able to tackle mine using my hands so had to use a knife and fork. My friend was more adventurous (and also had a more compliant filling) so got her mitts on hers. My sandwich consisted of spicy smoked sausage, barbecue sauce, crispy onion and jalapeños. There were perhaps a few too many chilliest for my taste but that is probably personal preference. The sausage was nice but didn’t taste very smoky. The difficulty with having to eat with a knife and fork, alongside the barbecue sauce, meant that the paper lining the tray kept coming apart and attaching to the food, so I was continually having to pick paper off my food. However, the slaw was great and creamy without being too rich. The fries were ok. My friend commented that they lose their heat too quickly when spread out on a non-warmed plate (or baking tray as was the case here). That being said, she loved her Triple P sandwich, which consisted of pork shoulder, crispy onions and barbecue sauce. She thought it had great flavour and scoffed the lot. The BBQ pit beans had a lovely smoky taste and the meat chunks were plentiful. 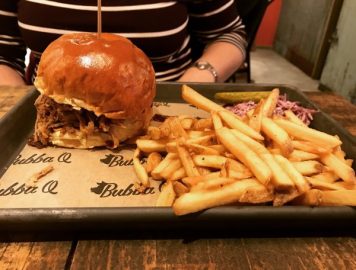 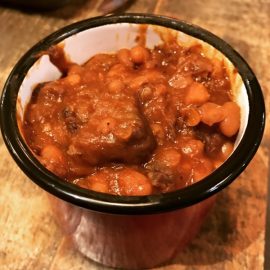 Bubba Q is good enough but nothing spectacular. It’s location will keep it safe but needs to pick up its game to be on a par with other smokeries in the city.

Would I eat here again? Maybe

Cost £25 for two sandwiches, one side and two soft drinks