First Coast can be found on Dalry Road and refer to themselves as a neighbourhood bistro, whichI think indicates it’s relaxed atmosphere well. The restaurant was busy on arrival and we were seated at a table nestled near the back of the restaurant. First Coast has a relatively condensed menu but there were also a number of specials available. In the end I opted for the pork fritters from the specials list to start, followed by the cod from the normal menu. My dining companion went for the fish pakora from the specials followed by the Thai marinated chicken salad from the standard menu. We were given some bread to keep us going whilst we waited.

The starters looked good when they arrived. The pork fritters were generous in size and had good flavour. The fritters were to come with bacon, apple and mustard. What they actually came with was salad leaves, a couple of tomatoes and sliced red onion with a couple of slices of apple, minuscule pieces of bacon and a tiny touch of mustard, which left the plate feeling a little unbalanced based on how it appeared on the menu. That being said, I still really enjoyed the dish and would happily order it again. It just wasn’t quite what I expected based on its description. On the other side of the table, the fish pakora were warmly received. The only recommendation was a bit of lemon might have been a nice touch. However, the chilli sauce which accompanied the pakora was great. 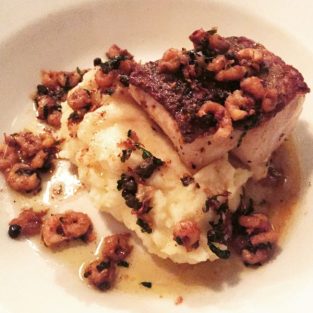 The mains looked as impressive as the starters. My cod was cooked perfectly and flaked with elegance. The brown shrimp were plentiful and tasted delicious. The mash was creamy and soaked up some of the beautiful garlic butter. However, again the description led me to believe there would be broccoli. I could see a few green flecks but nothing identifiable as broccoli. The dish was actually lovely regardless but again, expectations the you one way by the menu but the plate takes you another. My friend was enjoying her salad, which looked vibrant and was a good substantial size, with the red peppers and mango particularly popping out.

Nothing took our fancy for dessert so my friend finished her wine and I had a Baileys. However, if you are interested, there were options of desserts such as jam roly poly, ice cream etc. First Coast is offering good, hearty food. I think they just need to improve how they explain things on their menu better. It won’t put me off going again though.

Would I eat here again? Yes

Cost £62 for two starters and mains, a bottle of wine, a vodka and lemonade and a Baileys.