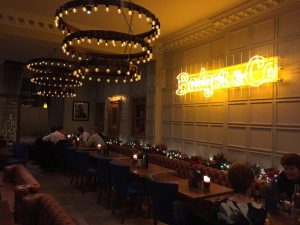 Badger & Co is situated on Castle Street on the former home of Kenneth Grahame of Wind in the Willows fame (hence the name and quirky animal related décor). I had already visited a couple of times for drinks but this time we popped along to try out the food. The menu had plenty of options that were tempting and in the end I went for grilled scallop and apple black pudding followed by crispy Parmesan gnocchi. My dining partner went for chicken and chorizo croquettes followed by curried battered haddock and chips. Whilst waiting for the food I sipped on a delicious cocktail whilst my friend had a lovely glass of red wine.

The starters arrived and we tucked in. I have to say these were some of the best cooked scallops I have ever had. The flavour was spot on and worked with the black pudding. The tomato confit, peppers and spring onion salad kept the dish light and fresh. I was seriously impressed. On the other side of the table, my friend was also happily munching on her croquettes. She had expected them to be a bit dry but they were incredibly moist and the watercress, roasted garlic and herb aioli was really good, albeit in a slightly short supply. A great course. 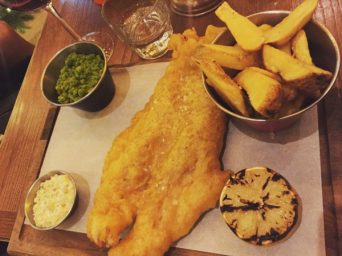 Haddock and Chips – Badger and Co

Onto the mains. My gnocchi looked good but when I cut into it, it didn’t appear to be gnocchi as I know it. It seemed to be more like a cross between sautéed potatoes and chip ends. It was still really tasty but not what I expected. The gnocchi came with pumpkin, chestnut and rocket pesto. They were good in both texture and flavour. My dining companion was given a massive piece of fish. She said that you could really taste the curry flavour in the batter which was good. The batter was a little thick in places though which wasn’t for her. The chips were excellent, as was the mustard tartare. She’s not a big fan of peas but thought the crushed peas were fine.

We had just enough room for dessert, so I went with the mango and lime parfait and my friend chose the upside down apple pie. On arrival my parfait didn’t look much but the flavour was delicious and the texture creamy. It came with a pineapple and chilli salsa. The chilli wasn’t overpowering at all and just added a subtle warmth. A couple of wafers added further texture. A very satisfying dessert. My friend’s apple pie wasn’t much to look at either but tasted great. It was a cross between a tarte tatin and an apple pie with. She enjoyed the dish, including the toffee sauce and ice cream.

Overall, we enjoyed the meal, although their real strength seems to be their starters.

Would I eat here again? Yes, the starters are worth it.

Cost – the food was complimentary but would have cost £52 plus a further £14 for drinks.

Please note that whilst this meal was complimentary, views expressed are my own. Thanks to Lauren from Crimson Edge PR for inviting me.

One thought on “Badger & Co”