After giving blood, we wanted to go somewhere not too far to get a quick hit of food. We decided to try Wings to top up on some chickeny goodness. Hidden down one of the closes in the Royal Mile, Wings has more space than you would imagine. Upon arrival it feels as if you’re entering an underground secret club of eaters. The place was busy and not surprisingly popular with students. Each table hds a theme and the walls were covered with quirky drawings and decorations. There was plenty your eye is drawn to.

The menus didn’t indicate the price for food but it did for drinks, which is a bit odd but we could see on the blackboard that each bowl of 6 wings was £4.20. A small range of other sides are available such as chips but we decided to go for two bowls of chicken each. The menu also indicates heat levels which was useful. In the end I went for ‘ooft ‘ and ‘jamaican me crazy’ and my friend chose ‘Mardi gras madness’ and ‘push it’. 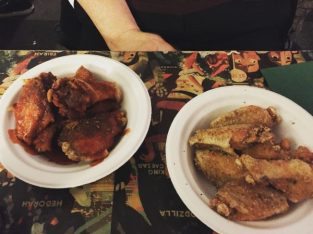 Upon arrival of the bowls, we were told that the two buckets in the table are for rubbish, one for the bones and one for everything else. We got tucked in. This was going to be a messy affair. Firstly I ate my ooft chicken. This meant my wings were covered with hot garlic sriracha sauce and a chicken rub. This almost had a sweet and sour flavour combined with a bit of heat. These were good. However, I preferred my second bowl, Jamaican me crazy, which was a BBQ jerk sauce. This was just right, with a mild warmth permeating through the barbecue sauce. The chicken was succulent in both dishes. On the other side of the table, the mardi gras madness sounded like it had a similar flavour to my ooft wings. They were covered in a Louisiana hot sauce. She was definitely left with a very tingly mouth. She then moved onto the push it wings, which had a salt and pepper coating. She enjoyed these too.

This was a fun experience and with plenty of different toppings, you can get a completely different flavour sensation each time you visit.

Would I eat here again? Definitely