Already well established in Stockbridge, Rollo opened up on Broughton Street earlier this year. Having not been to the Stockbridge venue, I didn’t know what to expect. The place was buzzing, far more than I’d ever seen the previous restaurants in this same venue, which was promising. We were seated in a little corner table with scattered cushions, which was lovely. The menu offered a wide range of cuisines so I decided to mix and match with pork and prawn gyoza for starter and beef fillet for my main. My friend went for haggis bon bons for starter and slow roasted lamb salad for main. We thought, based on cost, we’d need to order sides so I went for baby potatoes with onion, garlic and prosciutto and my friend went for hand cut chips. 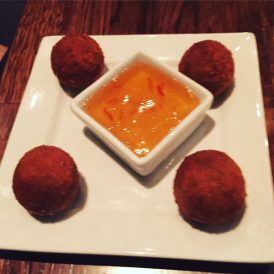 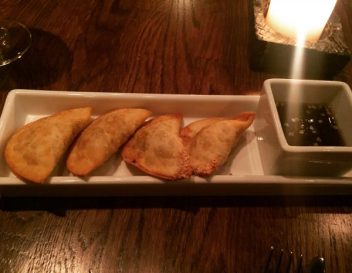 Starters were brought out quickly.  Rollo opts for simple presentation. My gyoza were differentiated by sesame seeds on the prawn ones. They were nice and were even better when dipped into the chilli, honey and coriander sauce. However the pork gyoza stole the show. The flavour packed so much in and the dipping sauce finished them off beautifully. My friend enjoyed her haggis bon bons but she felt they were pretty standard. She didn’t fancy the marmalade sauce so left that. 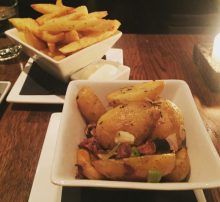 The mains were more generous than we expected but we were not complaining. My beef fillet came as medium rare, which was fine by me but would be nice to be offered a choice (I love rare). The parmesan and rocket was nice with it. I particularly enjoyed the basil oil which was vivid in its taste. The potatoes were just divine. The flavour was delicious and I really have to try to recreate these at home, so much was my love for them. It was a shame I couldn’t finish them all. The lamb salad on the other side of the table was going down a storm. There was a very generous meat to salad ratio which was impressive. The salad had enough variety to prevent it from being dull.  The chips were also yummy.

We wanted to try dessert but were verging on full so shared a raspberry, lime and ginger cheesecake. Again, this was a hearty portion. The cheesecake was zingy, creamy and delightful. The ginger biscuit base was a nice alternative and added some depth to the dish.

We really enjoyed it here and are looking forward to another visit.

Cost £53 for two starters, two mains, two sides, one dessert and a glass of wine.

One thought on “Rollo – Broughton Street”