We fancied a bit of dim sum and whilst Saigon Saigon is in a prime position in the centre of the city, we’d never been in before. Inside sports typical Chinese restaurant décor and was filled with lots of tourists piling in with suitcases. Handy for Waverley I guess. 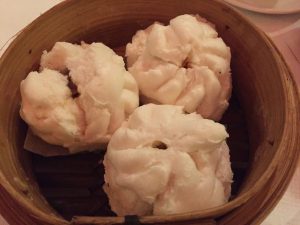 We were sat at a table and told if we were ordering dim sum there were a list of about 6 items that were sold out. This was a bit surprising considering the time of day we entered. Anyway, we perused the multiple menus but knew we wanted dim sum. We ordered two lots of roast pork buns (as they are my fave), prawn and chive dumplings, Vietnamese spring rolls and grilled pork dumplings. However the waitress came back to say the grilled pork was now also off the menu. She didn’t bring us a menu so we can re select, so we added a second lot of prawn dumplings to save further faffing. We also ordered two diet cokes which we had to chase twice and finally got them half way through our meal. 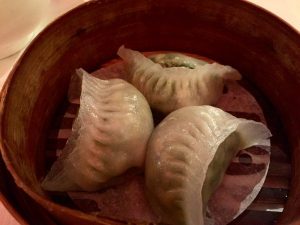 The food itself did come out in a timely manner. We started off with the prawn and chive dumplings. They were incredibly sticky and glutinous but very moreish. The flavours were good and the filling identifiable rather than just being a mush. The pork buns were amazing. Soft and fluffy with as tasty pork centre. These are quite filling but I am still glad I had three to myself as every mouthful was worth it. The Vietnamese spring rolls were a really nice surprise. I am not used to having deep fried ones but to my delight they were crispy on the outside but the filling was still pristine and bursting with flavour. It was accompanied by a great dip which was also brilliantly flavoured.

Lots of the food being brought out to other tables from the a la carte menu looked and smelt great. Shame the service means we’re not so likely to head back when there are other excellent places for dim sum.

Would I eat here again? Unlikely