Civerinos (pronounced chiv-er-inos) is situated on Hunter Square. I had been meaning to come here for some time but the tone of their Instagram feed made me a little wary that it might be quite a blokey environment. However the lure of pizza tempted us in and my wariness was unfounded.

The environment was actually perfectly fine. We dropped in so were given a little over an hour to eat (as the table we were given was booked for later), which we managed but may have struggled if we had ordered starters. However, we wanted a pizza each so skipped the starters, although there were plenty of options tempting me, such as calamari and bruschetta. I was umming  and ahhing over which pizza to have, a bit worried that the hot hot sausage might be a bit too much for me. However a lad sat next to us (communal dining) chipped in to assure me it wasn’t too hot, so I took a gamble. My dining companion went for the BBQ pork. 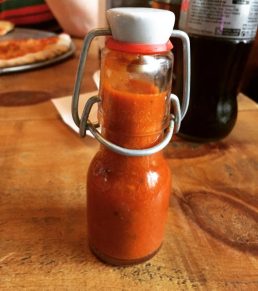 We weren’t waiting long before the pizzas arrived. Large in size but very thin and crispy, which is my favourite type of pizza. The toppings are sparse but somehow seems right in order not to overload the thin pizza. Mine came with an additional bottle of hot sauce. Whilst I added a little on, I didn’t think it really added anything to the pizza. Otheriwse, it was a flavoursome pizza that hit the spot. On the other side of the table, the BBQ pizza was going down well, although there were a couple of bits of hot chilli that caught her a bit off guard with their heat. She definitely enjoyed her pizza and indicated she happily visit again.

We enjoyed our pizzas but we think next time we’d have a starter each and share a pizza to get the most out of the menu.

Would I eat here again? Most likely

Cost – just under £40 for two pizzas, one beer and three diet cokes