Byron stormed on to the burgeoning burger scene in Edinburgh recently. Not only have they opened a branch on North Bridge, they have recently just opened a second branch on Lothian Road. On this visit we were heading to the North Bridge restaurant. I was a little wary on arrival based on previous reviews I had read that we were going to be embraced by an over enthusiastic set of staff. However, this wasn’t the case and it was simply a friendly welcome. This restaurant is tardis-like. From the outside it looks average in size but inside it is actually spread over two floors, mezzanine-style and has tons of seating, many of it in booths.

I spotted on the menu that if you buy a special burger, it forms one of the ‘one feeds two’ scheme where a school meal is bought for a child living in an area of poverty for every special burger you buy. Unfortunately the burger in the special wasn’t my cup of tea for me but I will definitely keep an eye out for the special next time. So I decided to go for a cheeseburger and pimped it up with Byron’s special Freddar cheese, which was the only cheese that came at an extra cost. My friend went for the smoky burger and we both got fries and shared a portion of onion rings. 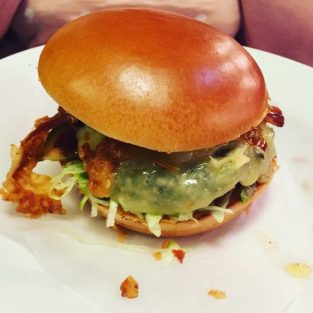 Smoky burger – Byron
We seem to wait a little while for our food which seemed a touch odd for fast food. Hhowever it was worth the wait. I admit that these burgers didn’t have the visual wow factor of some of the burger joints in Edinburgh but the taste more than made up for this. My burger was hefty, meaty and packed with flavour. The Freddar cheese was nice but I am not sure it was worth paying extra over American cheese. My friend enjoyed her burger too. Whilst she continued to protest that she preferred a toasted bun, she had to admit that the bun did hold together well. I was also impressed that I could eat my burger without having to cut it in half. The fries were excellent- some of the best I’ve had in Edinburgh. The onion rings were light and had a tasty batter. I would just like to make my usual request to get ketchup in squeezy bottles as it’s a pain getting it out of a glass bottle, no matter how nice it looks. 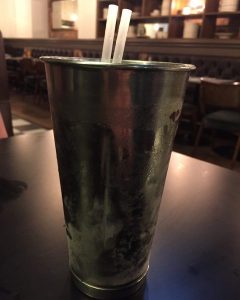 We were feeling greedy and topped dinner off with milkshakes. These are humongous and probably had my calorie intake for the week in it (neither of us managed to finish them). You can opt for booze in them too. I had a Reece’s peanut butter cup one and my friend went for banana. They were fab and I’d definitely have one again.

We had a long wait for anyone to come to our table to take these away and eventually just called for someone so we could get the bill. Not ideal but we were chatting away so it was not a big problem. Service was very pleasant though.

We enjoyed it here and would happily visit again.

Would I eat here again? Yup