We loved our trip to the sister restaurant the Apiary last year and had been meaning to get to Three Birds for some time. Smaller than its counterpart, there is something cosy about this restaurant but it may not be for those who like a bit of space round their tables. 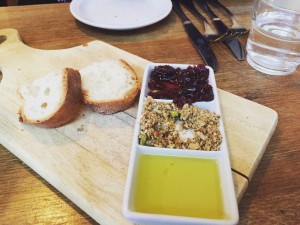 There were lots of nice choices on the menu. I was going to go with the blackened salmon and then remembered I’d had a salmon salad at lunch so decided to go for the unusual confit duck and cheese balls, followed by a special of sweet potato and chipotle gnocchi. My friend went for the salmon dish instead followed by pork belly. We also ordered some 3Bird dukkah, bread, extra virgin olive oil and smoked shallot vinegar. This was nice but nothing special. One piece of bread was very stale and hard on one side, obviously an end which was a bit of a shame. The dukkah was good though.

The starters arrived quickly and looked very smart. I have to admit, when I saw my starter on the menu, I did imagine either Marcus Wareing or John Torrode pulling one of their faces on Masterchef when someone suggests an unusual combination they think won’t work. I tucked into the duck confit balls and they were very moist and flavoursome but as suspected, I couldn’t see what the cheese added. Whilst not an awful combination, it wasn’t a winning one either and just left me a little puzzled. The Seville orange chutney was nice though and worked with the duck as expected. On the other side of the table, the salmon was enjoyed. There was plenty of kick in it, which is a nice change and showed they are not afraid of commitment to flavour. 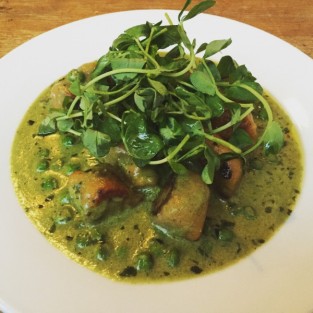 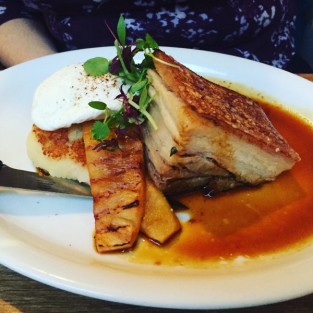 Onto the mains. Upon arrival, mine smelt phenomenal and the taste lived up to the aroma. The gnocchi was full of flavour and a subtle warmth of the chipotle permeated through the dish. The gnocchi was sat onto a pea, cream, garlic and Parmesan mix which was simply divine. The whole lot was topped with pea shoots. This was a truly beautiful dish. On the other side of the table my friend was excited at the sight of a beautifully crispy skinned pork belly. This was atop a generous portion of meat. She also thoroughly enjoyed this course and I could hear the crunch of the cracking from my side of the table. 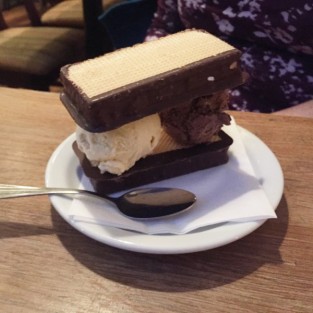 We were tempted by the fun desserts so decided to squeeze one in. I went for a boozy and poppy rainbow jelly , consisting of vodka, curacao and grenadine and my dining partner went for an ice cream slider on nougat wafers. For the slider there was a choice of multiple ice cream flavours (including weird concoctions such as marmite!). She went for the pedestrian vanilla and an after eight one. Upon arrival mine looked colourful but I am not sure whether two colours (or three including the sauce) constitutes a rainbow. However, popping candy is always fun. The jelly lacked in flavour though and the alcohol was perhaps a bit too strong (I could feel it when I stood up to leave). The orange sauce was also very strong and perhaps made the jelly taste more bland because of it. I just found it a little underwhelming. The ice cream and wafers were devoured on the other side of the table though, so that was a hit.

Whilst the food was good here, I think we were spoilt a little by the Apiary and expected a similar experience here, which wasn’t quite the case.

Would I eat here again? Yes based on the strength of their mains but would prefer the Apiary

One thought on “Three Birds”