I came here to try canapés at a Zomato event last year but this was not enough to review fully (although I did do a mini review here). I swore to go back and try it out properly and a deal on itison prompted us to get our act together and go. The voucher deal included prosecco, amuse bouche, starter and a main course for two. I did let my friend have my prosecco although I could have substituted it for a soft drink.

It is difficult to find the restaurant within the Glasshouse Hotel as you have to be let into the lift by reception then walk along hotel room corridors then past a snug, down some stairs and along another corridor before you get there. Whilst this may be fine for hotel guests it is not overly accessible for the general public. I can understand why they chose this venue within the hotel because of the lovely panoramic views of Calton Hill, but alas, the curtains were drawn as it was dark outside, so no night-time view. The dining room itself is quiet and understated but we were warmly welcomed and had a choice of tables, all nicely spaced out, so we never felt too close to other diners. The menu was relatively short but varied enough. I went for scallops and venison and my dining companion opted for wild mushroom pithiver and lamb. The amuse bouche came and was a venison pastry dish. It was very pleasant but I felt it was an odd choice for an amuse bouche. 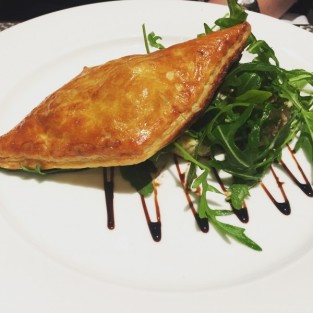 The starters arrived and looked good. My king scallops were cooked very well and there was an extremely generous portion. There was, however, only a small amount of cauliflower puree and it would have been nice to have a touch more. The accompanying morcilla was delicious and worked well with the scallops. The only thing I wasn’t sure about was the dried cauliflower on top, as the flavour was not intensified and just tasted chewy, so I don’t really know what it added to the dish. On the other side of the table, my friend thought that overall her dish was quite nice. She commented that the salad with the blue cheese and dressing was very good. The pastry was also good quality but the mushrooms were a little disappointing and as a result didn’t feel as if it came together well. 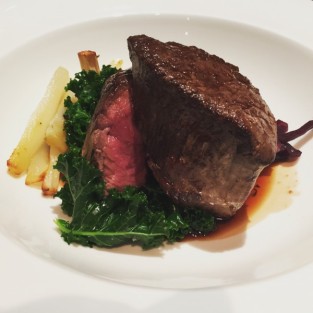 Onto the mains. My venison was cooked as requested (rare) and was simply delicious. The meat was tender and melted in my mouth. The salsify was cooked so it was almost sweet yet still earthy. The red cabbage/bramble combination was a pure joy and worked perfectly with the gamey meat. My dining partner was also enjoying tucking into her lamb, which also very good and cooked well. The puy lentils were excellent. We were both very pleased with this course. 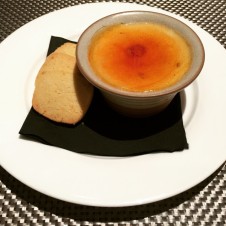 We decided we could squeeze in a dessert, which was additional to the voucher. I went for the cherry Bakewell tart with custard ice cream. My friend went for pomegranate crème brûlée. Upon arrival, my dessert had the pointless paintbrush stripe of sauce across the plate which wasn’t enough to add anything useful. Overall though, the dessert itself was nice enough. The ice cream was a bit too hard and not as creamy as I’d hoped but that was a minor quibble. However, a cardinal sin was occurring on the other side of the table. The crème brûlée had not been finished properly and the sugar topping was gloopy in the middle and sticky on the outside. It stuck to the spoon. There was no crunch of the spoon breaking the caramel here. I suggested sending it back but my friend didn’t want to make a fuss. This did deny the restaurant an opportunity of rectifying this error but it shouldn’t have happened in the first place. The rest of the brûlée was nice and the pomegranate worked well. It is a shame the topping ruined it. The accompanying shortbread was decent.

Overall, the Observatory was pleasant enough. There were highs but also a few lows which was a shame.

Would I come here again? Not sure