Printing Press Bar and Kitchen has popped up in the venue where Tempus used to reside on George Street. A complete refit has taken place and the venue now has more of a plush brasserie type feel. It seems that the restaurant was going for a soft launch, with many people invited before their official launch on 22nd October. We were offered 50% off food so we snapped at the chance. Obviously this discount was being offered to give the place a chance to iron out any kinks in delivery of food and service so this review is writing with that in mind. 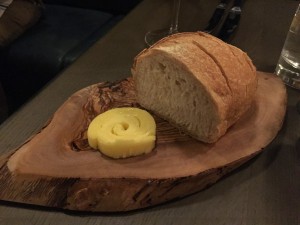 The restaurant was fitted out with low lighting, dark wood and plush seat coverings. This place is still so new the seats zipped a bit across the shiny floor. The menu offered a good choice, not just in types of food but sizes of dishes. Whilst the standard starters, mains and desserts were on offer, there were also salads, sandwiches and lighter bites available. The wine list seemed extensive but there were only 3 cocktails which were written on a board. A little disappointing particularly as I didn’t fancy any of them but it does seem that there are more on offer now after checking their website. I opted for venison tartare to start followed by a flat iron steak. My friend went for hot smoked salmon followed by chicken, avocado and smoked bacon salad (yeah I don’t get a salad for a main either!!). Whilst waiting for the food to come we were given some complementary bread. This was warm and delicious, particularly with the curl of butter but it would have been easier if the bread had been completely sliced instead of half way as the butter knives weren’t good enough to cut through the base of the bread, leaving us to manhandle the loaf to tear a bit off. Didn’t stop it from being delicious though.

The starters arrived, looking appetising. As my regular readers will know, I am keen on a steak tartar but I’d never tried a venison one before. I have to say I really enjoyed it. The meat had more intensity but it worked well with the flavours and the egg was yummy. The sourdough toasts also were perfectly crunchy and added a wonderful texture element. It also left a nice tingle in my mouth afterwards which was very satisfying. On the other side of the table, the salmon was good but she felt as if the creamy part of the dish was like a splodge on the plate and made the dish a little unbalanced. She wasn’t sure if this might have been a personal preference though. 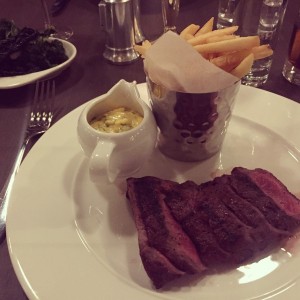 We didn’t have to wait long for the mains. My steak looked to be of a decent size but it was already cut into slices for me, which was a bit odd. However, it was cooked a perfect rare, just as I had asked and was full of flavour. The meat was tender and not chewy in the slightest. The chips that came with the steak were the perfect fries and probably the best I’d had in a very long while. They were crispy and fluffy in equal measure. The béarnaise sauce was served cold. I’m not sure if this was the intention or not (as it can be served either way) but all the other sauces available were ones which are usually served warm. As a result, it did leave the sauce a bit thick but it was still incredibly tasty. The added side I got of wilted greened where incredibly good, having been cooked in garlic. My dining companion’s salad seemed ok but a little less generous than expected for a main. The reason became apparent about 5 minutes later when a senior member of staff came out with a second dish of salad and an apology as my friend had been given the starter size rather than a main. My friend commented that the size was probably quite generous for a starter but gladly took the additional salad as she was really enjoying it. She particularly commented on the quality and taste of the chicken. This was also a sign of good customer service, acknowledging an issue even when it wasn’t overly apparent to the customer and fixing it immediately. 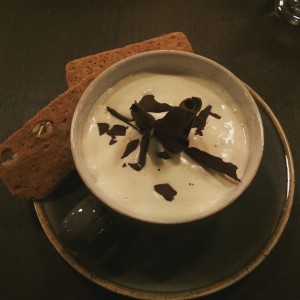 We were getting close to stuffed but couldn’t miss the opportunity for dessert. There were a nice range of sweets and left us both with a good dilemma. I ended up plumping for the chocolate and salted caramel pot and my dining companion went for some cinnamon ice cream. The chocolate pot actually arrived in a tea cup and looked very attractive. There was a creamy top to it with shards and curls of chocolate to make it look like I was having a coffee or hot chocolate. The pot itself was not as heavy as I was expecting which meant I was able to polish off the lot. The chocolate was bitter enough that it wasn’t sickly and there was a smallish amount of salted caramel for the same reason. This was accompanied by a couple of delightful hazelnut biscuits which were equally as light and had a tasty dusting of sugar on top. The ice cream on the other side of the table was good and had a distinct cinnamon flavour without being either too weak or overpowering.

All in all, we enjoyed our meal at the Printing Press. The service was good and the food was tasty. Was I incredibly wowed by the place? Probably not. Was I extremely content? Most definitely. I’d happily go back for more (and to checkout that cocktail list).