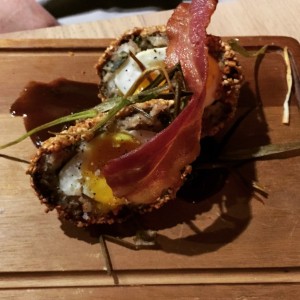 After a failed attempted to visit Innis & Gunn’s The Beer Kitchen when newly opened (where we did not pre-book), we made sure we’d have a table waiting for us this time. We had booked plenty in advance and upon arrival seemed justified. Whilst it could be attributed to festival time, being packed to the rafters with what appeared to be mainly business folk indicates this place will be busy long after August disappears over the horizon. This did make the venue a bit loud and wouldn’t be recommended if you are wanting a quiet bite to eat. 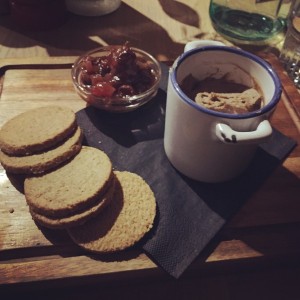 We were shown to table in the corner and given menus. There was a modest offering but plenty to choose from, particularly for the meat eater.

Controversially, we did not have any beer (I can sense you all scowling). I went for chicken liver pate followed by flat iron steak. My dining partner went for the scotch egg followed by the pork belly. 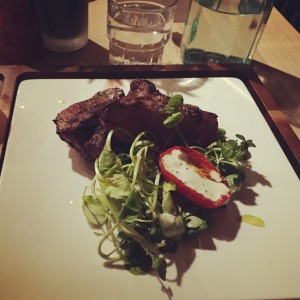 When the starters arrived, they came on big boards (which I am not sure is entirely necessary) but looked impressive. My pate came in a mini mug. 5 small oatcakes adorned the board and a little dish of chutney sat on the side. The pate was smooth and light. The chutney light and fruity but the long strands of onion in it were a bit too big for the oatcakes. One the other side of the table, the scotch egg was big but not too filling as the sausage meat wasn’t too much. The crumb on the outside was nice and crunchy. The accompanying bacon and brown sauce worked well to bring the dish together. 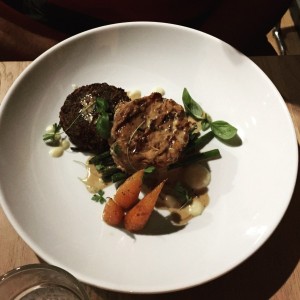 Onto the mains. My flat iron steak came in two generous pieces, cooked as requested (rare). The chargrilled flavour was distinctive but not overpowering the meat, which was also juicy. At the time of ordering I has a choice of sauce: béarnaise or peppercorn. I had chosen béarnaise. This came in a little side jug but looked a little like it had split but I soldiered on and it tasted fine. The dish seemed to be missing the advertised rosemary flavour, Either it has also been charred to the point of no recognition or it was in too short supply. This wasn’t the end of the world though. The watercress as described but seemed a little lacklustre next to the steak. The pork belly on the other side of the table was deemed satisfactory but lacked flavour, most likely needing more seasoning. The rosti on the other hand was delicious. 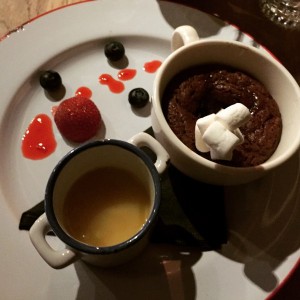 I was the only one who had dessert and I’m not ashamed to say it. I went for the chocolate and peanut cupcake with a salted caramel sauce and mini marshmallows. I think this was more like a muffin and had been cooked in the cup it was serves in. It was not too cloying and salted caramel was not thick and overpowering. I have to say this dish was yummy and comforting. It put a smile on my face.

I would come here again but only when I wasn’t looking for a quiet evening out.