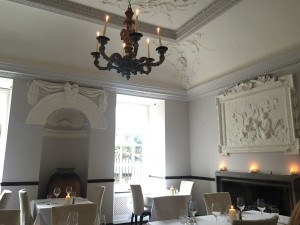 A couple of us at work had been talking about trying Anfora and when we saw a deal for four, including starters, mains and a bottle of prosecco for £49, we thought we would take the opportunity with a couple of colleagues. Anfora is situated in the Vintner Rooms and when we were greeted and seated, we were given a short and interesting history of the building. The restaurant is split into two, with the dining area near the bar a darker area and the dining section we were in was a light, bright room, lit by candles as they cannot put any wiring in the room. The walls and ceiling are still the originals dating back from the 17th century. Although we had a voucher deal, this did enable us to order form the standard a la carte menu. For starters I went for scallops and then surprising I opted for the tofu for the main. The others went also for scallops, mackerel and quail for their starters and two went for pork and one for fish for the main. 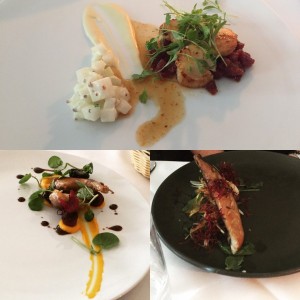 We were given a couple of types of bread and some soft butter whilst we waited for our food. I did find it a little odd that the waitresses were leaning across diners to reach others, rather than going behind the diners when the tables either side were unoccupied and therefore left enough space. However, we had prompt service and the starters arrived not long after. Weirdly, they were not all brought out together and another table were also getting part of their meals at the same time. This seemed a little strange. Anyway, back to the starters. They were visually impressive. The scallops I had were not rubbery but small and soft. The chorizo jam was exceptional and provided a wonderfully sweet and spicy element. The apple and kohlrabi was also lovely and light. The other diner eating the same dish felt exactly the same. My friend eating the quail commented that she was a little worried that the dish would be too sweet but was actually just right. The mackerel eater commented that the orange was slightly bitter but the mackerel flavour was strong enough to stand up to it. We were all very happy with the starters.

The mains that followed continued the theme of excellent presentation. My tofu was an inspired choice, even though I am a hardened meat eater. I had been swayed by the honey and soy element of the dish and I wasn’t let down. The dressing was excellent and the summer salad was fresh and full of goodness. It was a perfect choice for a summers evening. The pork was also enjoyed by my two friends who had opted for it. The cheek element was particularly well received. The crackling was also crunchy. My friend who had chosen the fish commented on the generous portion size and that it was delicious. Again, a course we were all happy with. 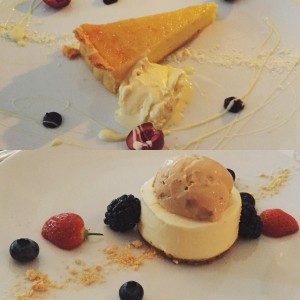 We had a bit of a chat as to whether we would head on somewhere for drinks or whether we would stay for dessert. We decided to stay on and try a dessert. Three of us decided to indulge, two going for the white chocolate tart and one for the elderflower cheesecake. Sadly, we waited an inordinately long time for these. These types of desserts should only have needed plating up. We were waiting for the best part of 40 minutes for them. When they arrived, we did get an apology for the delay but no real explanation. The white chocolate tart was actually delicious and not sickly in the slightest. However, the ‘cherries’ that accompanied it turned out to be three halves of cherry. I think that when it is that minimal it doesn’t constitute part of the dish and is mere decoration. The ice cream was not a full scoop and much of what was there had melted. The reason for this became more apparent as the diner eating the cheesecake delved in to find it was starting to melt. Not what you expect for a cheesecake. These desserts must have been left on the pass for a considerable time. We did think about complaining but at this point we had waited so long we decided just to ask for the bill. We did this but then that didn’t arrive. I had to ask a different waitress and it eventually arrived. This took another 10 minutes or so. It really took the edge off the meal.

Had we finished after the mains, we would have left with a pretty good impression of Anfora. Sadly the experience after ordering the desserts took the shine off the experience. That, combined with the slightly strange waiting style (and my friend’s coat which had been thrown, inside out and at an angle, on a coat stand) meant that we were a bit deflated by the time we left.

Cost – £49 for four starters, four mains and a bottle of prosecco plus an additional £19 for three desserts. True cost without the voucher would be around £140.