Well I admit I was a little worried that a rather strong margarita I had at Biblos as a pre-dinner tipple was going to scupper the whole evening’s experience and loosen me too much to competently review it. Whilst I have eaten at Angels with Bagpipes before, this was the first time I was contemplating reviewing a restaurant. Luckily, after a brisk and bracing winter walk around the corner and up the Royal Mile, the alcohol was no longer rushing round my head.

Coats were taken and menus promptly distributed. We had the option of a tasting menu (set at £45 for 6 courses and £75 if paired with wines) or the a la carte menu. We opted for the latter. The a la carte menu was relatively short but packed full of variations on classics. I opted for the beef tartare followed by the pollock. My dining companion chose the goats cheese followed by the Ross-shire lamb. Some bread and oil was brought to the table to keep us going (and perhaps soak up some of that cocktail before the ordered food arrived). My only little grumble is why give an odd number of pieces of bread to an even number of people? That said, it didn’t stop us from getting stuck in. Unfortunately we were sat next to the area the waiting staff put through the orders and stood to keep an eye on the room. The hovering was a little off putting but in a small room I guess that could not be helped.

The starters arrived relatively quickly. The tartare looked pleasing to the eye. I had spotted that it was beef rather than steak tartare, possibly indicating an inferior cut of meat. If this was the case, I certainly couldn’t tell. If tartare is on the menu I do like to give it a try. This one is definitely sitting at the top of those I have sampled, possibly alongside the Galvin Brasserie de Luxe’s offering at the Caledonian.

I enjoyed it so much that I forgot that I also had a side of thin, toasted bread to go with it and had to eat that as an afterthought. The meat had an amazing freshness to it and the egg oozed perfectly. The proportion of the quail egg to the meat was just right. The capers were not chopped up finely but somehow this added extra zing and bite to the dish. My dining companion enjoyed the goats cheese with beetroot but commented that it would be difficult to go wrong with this combination. We weren’t left long with our empty plates, which had been a bit of an issue on a previous visit, so it seems that our last experience might have been a one off.

The mains appeared not long after. My pollock looked really appetising. The extra side of thin cut chips was a good call, with a balanced crunch –to-fluff ratio and just the right amount of salt dusting.

The fish itself was cooked well and the skin was perfectly crispy. The veg alongside was adequate but nothing special. However, the star of the dish were the pickled mussels. Only a scattering of them appeared on the plate but seriously, I could have eaten a whole bowlful of those on their own. In a way, it was a shame they overshadowed the fish but I unashamedly do not care. The mussels were plump, juicy and sweet but spiked with vinegary goodness. My dining companion had dithered a little over ordering the lamb as she is still a little worried about meat coming a little rarer than her liking. I have her in training though! She was advised by staff upon ordering that it would come medium rare. I would say it was closer to the rare side than medium but my friend soldiered on. It was served on dark slate, so even if there had been any leaking blood (which there didn’t appear to be), it would have been easier for her to eat. She enjoyed the dish but again, the meat was not the star. High praise was offered for the accompanying lentils.

We were automatically given the menu for dessert without being asked if we actually wanted any. Perhaps it was just the look on my face that said I was in the mood for a dessert (which is the course I am most likely to forgo). I went for the parfait and my dining partner chose the cheesecake. 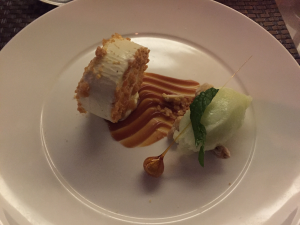 My parfait was tonka bean with caramel swirls, scattered peanuts and a caramel dipped hazelnut. Along with that was a Granny Smith apple sorbet. Both parts were excellent. The parfait was firm but creamy and the caramel complemented it. The sorbet was sharp and packed a punch. However, they did not go together. I just could not make the combination work. So I ate them as if I was eating two separate desserts, one after the other. I was hardly feeling hard done to! My dining companion was a little underwhelmed by the cheesecake. The pear seemed lost in the honey and didn’t appear to have anything that made it stand out. She felt that ‘it did what it said’ but it didn’t wow.

So, overall we had a lovely time and the food was of a great standard. There were just a few bits here and there that took some of the shine off what could have been a truly astonishing meal.

Cost – just over £75 for two three-course meals plus a single glass of red wine.